Mr. Steinberger was awarded the 1997 New York City Bar Matrimonial Project Certificate of Best Pro Bono Service. He volunteers and continues to be involved with the following worthwhile organizations:

Appointed to serve, together with other lawyers, judges, and distinguished panel members, to advise and recommend improvements to the New York State Family Courts.  Recently reconstituted as the NYSBA Committee on Families and the Law;

Organized and sponsored by the American Bar Association, Operation Standby is comprised of private-practice lawyers who volunteer to advise Judge Advocate General (“JAG”) lawyers who, in turn, assist the men and women in the United States Armed Forces on their personal legal issues.  To honor our servicemembers and to recognize my debt to the United States Armed Forces who liberated my parents from the Nazi Concentration Camps, we offer active-duty servicemembers (and their spouses) a 1/3 discount on our services;

The United States Department of State is obliged by the Convention on the Civil Aspects of International Child Abduction (commonly referred to as the “Hague Convention on International Child Abduction”) to assist parents whose children have been abducted to the United States, helping them access to the Courts and petition for the return of their children. The Attorney Network assists the Department of State in its mission.

Established by the New York State Unified Court System, pursuant to Part-137 of the Rules of the Chief Administrator of the Courts, in each County to resolve disputes between clients and their attorneys by mediation and arbitration.

Established by the New York State Supreme Court, the Matrimonial Mediation Project is designed to help parties resolve their disputes without the pain and destruction that extended litigation causes divorcing couples and their children.

Another program established by the Supreme Court to assist litigants in avoiding prolonged litigation and the harms it causes, the Early Neutral Evaluation Program gives parties and their attorneys a chance to present their best arguments to a single or panel of neutral experienced lawyers, and get a sense of the strengths and weaknesses of their case, helping them develop an appropriate settlement.

A mediation program by the Federal Court to help resolve its backlog of cases and expedite their resolution in a quick, voluntary manner.

Responding to President Bill Clinton’s Call to Action, the Aeronautics Committee of the CityBar enlisted and organized surviving members of the elderly Tuskegee Airmen to visit NYC public schools, recount tales of their dedication, heroism and exploits to the children, motivating and inspiring them to apply themselves in school and beyond. See Tuskegee Airmen Project.pdf.

An organization assisting youth from the ultra-Orthodox community to mainstream and obtain education, employment, fulfillment, and happiness. 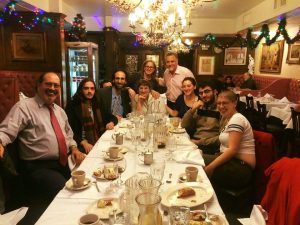 Dinner at the famed Forlini’s Restaurant for all the attendees.

A non-profit organization that helps women escape or avoid arranged marriages.  Mr. Steinberger serves as a mentor to lawyers representing these women.

As a member of the advisory board (2002–04), I advised the program that provided affordable court-ordered supervision to low-income parents who were not permitted to see their children without supervision.

Mentors future lawyers both individually and in groups.

Mr. Steinberger is actively involved in improving the law and the quality of legal services by his extensive involvement in bar associations and its committees.

Mr. Steinberger regularly volunteers to speak to civic and community groups on issues of family law and dispute resolution.

Mr. Steinberger lectures to mental health professionals about the intersection of mental health and the legal system, particularly in the area of divorce and family law;

For a fuller listing of past lectures see Lectures & Presentations; to arrange a lecture at your group or event, see Lectures and contact us at the email or telephone number above.